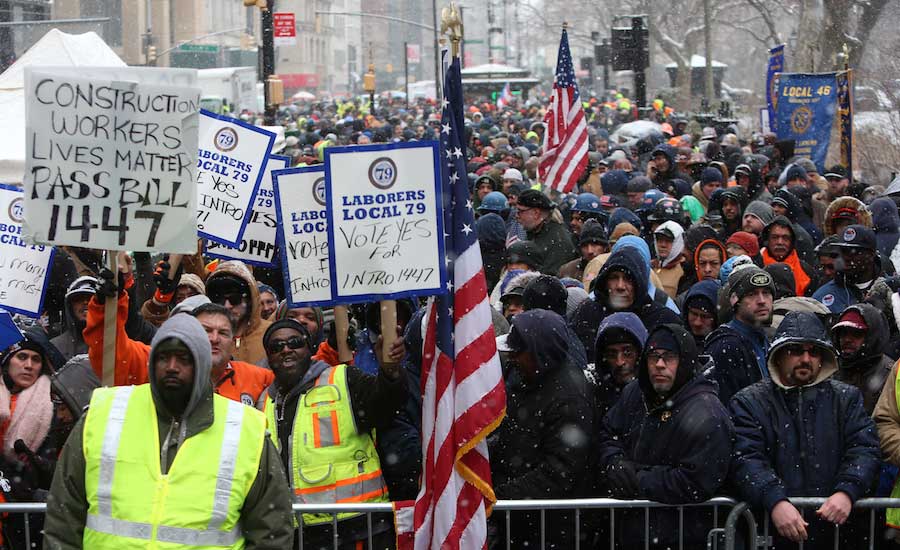 The New York City Council adopted on Sept. 27 a municipal construction safety law requiring workers on many projects to have 40 to 55 hours of safety training, well above the minimums required by federal law.

The unanimous vote concluded months of conflict that pitted the city’s building trades unions, which supported the law, against developers, who have claimed that the early versions and final version of the law favor union construction workers and contractors and create obstacles to employing minority group members and day laborers.

The council is the city government’s legislative branch and New York City enforces building construction safety through its Dept. of Buildings. The new law, called Intro 1447, is a response to a yearly construction fatality total in the city that reached 20 from 2007 to 2014, and has averaged about 12 in recent years, proponents say.

In the weeks leading up to the vote, the issue took on greater urgency as more workers died in fatal plunges at Manhattan construction projects.

In the weeks leading up to the vote, the issue took on greater urgency as more workers died in fatal plunges at Manhattan construction projects. The most recent death came when Juan Chonillo, a 43-year-old employed by a nonunion contractor, fell to his death at a lower-Manhattan high-rise project.

“We are not going to sit by as a legislative body and watch workers die,” council Speaker Melissa Mark-Viverito said at a press conference after the vote,

Mayor Bill de Blasio and Mark-Viverito would appoint a 14-member site safety task force, all of whom must have relevant construction safety experience. The group will determine the content of the training. Workers who complete or have completed recognized training will be issued site-safety training cards.

The training requirements would be phased in over time with a final deadline of September 2020. The new law applies to workers on building projects of five stories or higher.

Nonunion workers are more likely to require fresh training to qualify—a potential expense for the workers if employers are unwilling to foot the bill.

John Banks, president of the Real Estate Board of New York (REBNY) wrote on the association’s website, that as many as 120,000 workers “will be left at risk of not getting a contractor to pay for their training. With no sponsorship and insufficient public funding, these workers will need to pay for training out of their own pockets in order to keep working.”

According to the bill’s council sponsors, the new law allows workers to fulfill their training requirement by completing an alternative training program, such as an apprenticeship program—subject to approval by the city’s Dept. of Buildings.

The bill would also include provisions to aid laborers in receiving sufficient site training, including allowing them to continue working until they complete the training requirement. The new measure provides $5 million in funding for training workers unable to have “equal access” to safety training.

Penalties of up to $25,000 will be assessed for violations of the new requirements.

The measure adopted by the council takes effect over the next two years.

Every employer in New York City is compelled to comply with any state or federal workplace safety rules. Whether New York City’s new law is unique in the world of municipal labor safety regulation could not immediately be determined.

The issues embodied in the safety training law dragged out over many months as REBNY and the city’s building trades rallied support for their views.

An initial version of the law contained language that stated that all safety training required was to take place within an apprenticeship—a clear sign of the building trades’ influence over the text.

An early version made the basic training requirement 59 hours, but the council scaled that back.

The real estate developers, armed with their own analysis of accidents and fatalities, proposed as an alternative to safety training requirements a law requiring more thorough use of guardrails, safety netting and other steps designed to curtail deadly falls.

While far fewer union workers have died over the years—the exact number is disputed—the real estate board’s Banks notes in a website commentary that “six of the last twelve construction workers to die in New York City belonged to a union.” His remark was meant to cast doubt on what he says is “a different set of rules for union workers without assessing whether or not such workers have obtained the specific training.”

One key complaint of developers is that union employers will be credited for the training received as part of union apprenticeships.

Gary LaBarbera, president of the Building and Construction Trades Council of Greater New York, says that under the new law any union safety training taken more than five years before the new rules take effect will require the worker to take a refresher course.

“So it’s a little disingenuous saying we’re being grandfathered,” he said. “All people will be required to have a refresher course after five years.”