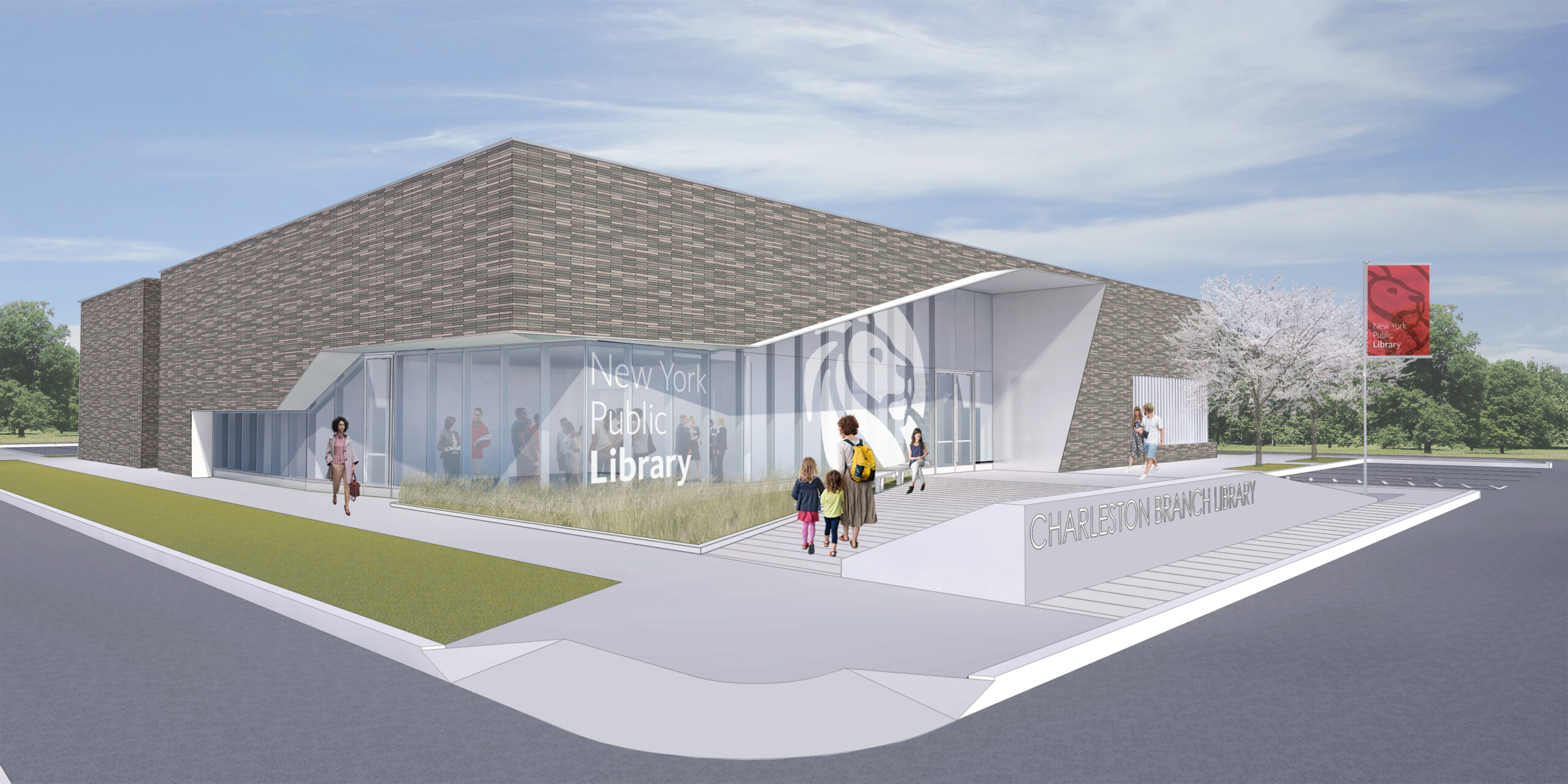 Photographs and video of the new Charleston Library available here, along with photos of the 2019 project groundbreaking. Credit to Jonathan Blanc / NYPL.

The New York Public Library hosted a grand opening this morning for its newest location, Charleston Library, located at 225 Bricktown Way on Staten Island. NYPL President Anthony Marx was joined by construction partners at New York City Economic Development Corporation (NYCEDC), Library staff, elected officials, and community members for a ribbon-cutting ceremony to celebrate the 10,000-square-foot building, which makes its debut as the 14th branch in the borough.

“The opening of the Charleston Library symbolizes an important moment in the history of The New York Public Library and the city we serve—representing a time of growth and renewal after extraordinary challenges,” said Anthony W. Marx, President of The New York Public Library. “Libraries are singularly equipped to provide New York City’s communities with spaces that foster connection and collaboration. As we enter a new chapter following a period of so much uncertainty and isolation, this beautiful new library—with its dedicated and knowledgeable staff and vital resources—will reinforce the support and inspiration that New Yorkers need and deserve.”

The $17-million project—managed by NYCEDC with Gilbane Building Company and designed by Ikon 5 Architects—offers dedicated spaces for adults, children, and teens, as well as books, computers, and multi-purpose rooms for a wide-range of programs and classes. Plans for the branch were informed by the Library’s “Building for You” engagement program, which solicited feedback from the community through public surveys and meetings to identify important amenities and services to the neighborhood.

Located in the Bricktown Commons shopping center, a 58-acre retail complex developed by the Economic Development Corporation, the LEED Gold branch is the first Net Zero/Net Positive library in New York City. With funding provided by the NYC Department of Citywide Administrative Services (DCAS) to enhance energy efficiency, the branch boasts a solar panel array on the roof which will provide nearly 100% of the energy that the building uses throughout the year. Additionally, the project had 63% minority, women-owned business (MWBE) participation during the construction of the library.

The Charleston branch includes a new, permanent public artwork by artist Mark Reigelmän, commissioned by the NYC Department of Cultural Affairs’ Percent for Art program. The piece, “Curiouser,” is inspired by literature and consists of a collection of objects capturing the essence of important literary items and stories. The small metal sculptures, ranging from keys to cats, are installed on the interior and exterior of the building where they can be discovered by library visitors of all ages.

The Charleston Library is the second new branch to open on Staten Island in 10 years, joining Mariners Harbor Library, which opened on December 15, 2013. A full renovation is also underway at Port Richmond Library—a historic Carnegie building that opened on Staten Island in 1905—which will receive significant improvements to its interior design and infrastructure and increased accessibility. The branch is expected to reopen in fall 2023. The Library also completed an extensive expansion of the Stapleton branch, another Carnegie Library, in 2013.

“Having spent nearly a decade at NYPL early in my career, I know firsthand the power of branch libraries as a community anchor. As we recover from the pandemic and drive the economic recovery, the educational and small business resources available at your local branch are more important than ever,” said NYCEDC President and CEO Andrew Kimball.  “We at EDC are particularly proud to have worked on the new Charleston Library that is not only a beautiful gathering place but is also the city’s first Net-Zero Energy library, which means it will not only be energy efficient but will produce as much power as it consumes.”

“This library is a model for what we can do to eliminate emissions from public buildings and help fight the climate crisis,” said NYC Department of Citywide Administrative Services (DCAS) Commissioner Dawn M. Pinnock. “DCAS is proud to have provided funding and technical expertise to make this the first net-zero energy library in New York City.”

“Libraries are open, democratic community hubs where everyone can come for social connections, learning, inspiration, and discovery,” said NYC Department of Cultural Affairs Assistant Commissioner for Public Art Kendal Henry. “Commissioned through the City’s Percent for Art program, Mark Reigelmän’s whimsical artwork ‘Curiouser’ in the new Charleston Library invites audiences to explore and discover playful sculptures throughout the library. A key, a half-eaten apple, a sea shell, a cat—each serves both as a beautiful standalone piece and a portal to imagining the worlds we access through libraries.”

“Long after I am gone from government, this library will be serving kids on the South Shore,” said Council Minority Leader Joseph Borelli.  “It’s almost surreal that it is now opening up, as it has been in various stages of funding and planning for over a decade. I am lucky enough to be the councilman at the end to score the points, but I have to congratulate my predecessors and former borough presidents for starting the funding of this project way back when. I grew up attending the Huguenot Library and listening to storytime in its children’s section, and I only hope that generations of kids to come will have the same experience.”

“The timing of the library’s opening is fitting as it follows the announcement of the 26th annual ‘Readers Are Leaders’ challenge. Earlier this week, we hosted the kick-off ceremony at P.S. 39 —my alma mater—and discussed the importance of reading with their 4th graders. I told them that the name of the program is ‘Readers Are Leaders’ because the more you read, the more you’re capable of leading in all aspects of life,” said Staten Island Borough President Vito Fossella. “That’s what this library will do. It will be a resource for all Staten Islanders to not only read, but engage in creative learning experiences. The addition of the Charleston Library provides a space for people of all ages to enjoy a good book, while also enjoying the views of Fairview Park. I want to thank NYPL President Anthony Marx and NYCEDC President Andrew Kimball for seeing the potential of this space that will benefit generations to come. I also would like to thank Council Member Joe Borelli, former Borough President Jimmy Oddo, former Borough President Jim Molinaro, and former Council Member Vincent Ignizio for their efforts in this accomplishment.”

“The New York Public Library has served as a pillar of the New York City community for over 125 years,” said Congresswoman Nicole Malliotakis. “This new state-of-the-art branch on Staten Island will be a fantastic place for families to gather, learn, and play after nearly two years of isolation. I look forward to visiting the Charleston Library and hope it provides our community with knowledge for years to come.”

“The new library will help engage students as they delve into the past, venture to the future, and experience new worlds,” said NYS Senator Andrew Lanza. “With community spaces, storytime areas, a room for teenagers, and adult programming, the state-of-the-art Charleston Library will have something for everyone. The library will enhance NYPL’s renowned programming. I commend the NYC Economic Development Corp. and Councilman Borelli for seeing this project through to completion.”

“Public libraries are the cornerstone of every community, providing our youth with a treasure trove of knowledge and sparking new interests that shape our next generation of leaders.  That’s why it brings me great joy to see this project move towards completion, and I can’t wait for opening day,” said NYS Assemblymember Michael Reilly.

The Library is grateful to the Mayor, City Council, Staten Island Borough President, New York City Economic Development Corporation (NYCEDC) and the Department for Citywide Administrative Services (DCAS) for their support of this project.