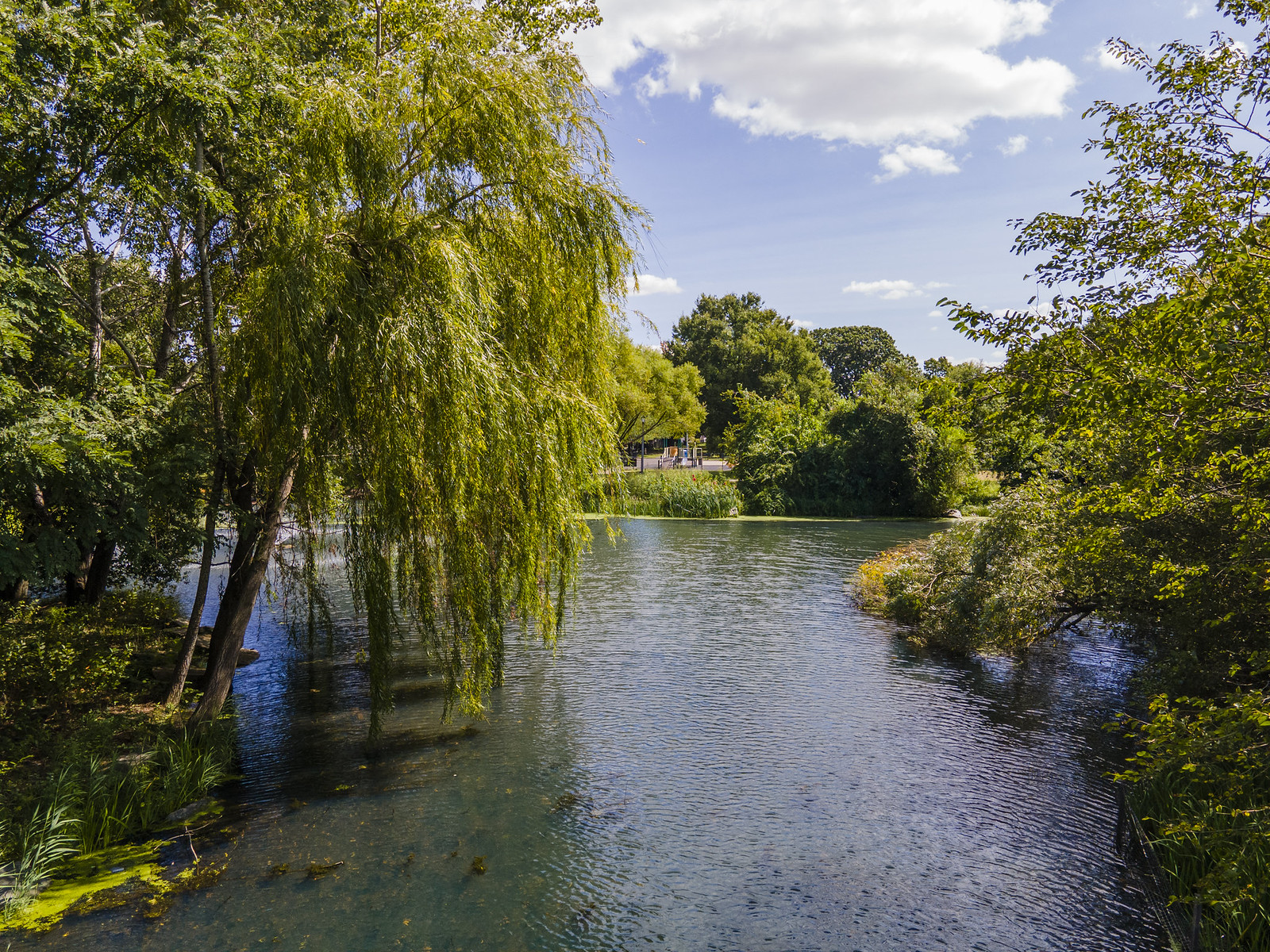 Upgrades are a part of the ongoing $1.9 billion effort to manage stormwater and reduce flooding in Southeast Queens; Photos of the work are available on DEP’s Flickr page

The New York City Department of Environmental Protection (DEP) today announced the completion of a stormwater management project at Roy Wilkins Park in Jamaica. The $2 million project included the construction of a stormwater drain on Merrick Boulevard to collect and divert stormwater away from the sewer system, where it could contribute to flooding and sewer overflows into Jamaica Bay, and towards a newly built natural drainage system within the Park that can absorb up to 760,834 gallons of water annually. Separately, the pond within Roy Wilkins Park also accepts stormwater and was dredged to create additional storage capacity and further relieve pressure on the area’s sewer system. Construction began in early 2020, continued throughout the pandemic, and was completed this summer.

“We have been diversifying the City’s drainage system beyond sewers, which have a capacity limit, for many years and this is a terrific example of utilizing green infrastructure within an existing Park to better manage stormwater from roadways while also protecting the environment,” said DEP Commissioner Vincent Sapienza. “As our climate continues to change and we see more intense rain storms we must utilize every tool available to us to manage the expected stormwater and I thank our in-house team and our partners at NYC Parks for completing this terrific project that will improve drainage in Jamaica.”

“We’ve seen the effects of severe weather and heavy rainfall firsthand this summer, with flooding from both Tropical Storms Henri and Ida,” said Acting NYC Parks Commissioner Margaret Nelson. “Smart park design is one way we can work to strengthen our city’s infrastructure and alleviate flooding both during and after storms. We are happy to work with our partners at the Department of Environmental Protection in Roy Wilkins Park to improve and protect Southeast Queens.”

“Hurricane Ida showed us this month just how critical it is to have modernized infrastructure that can handle storms that are only getting stronger and more severe,” said Queens Borough President Donovan Richards, Jr. “With the completion of this vital stormwater runoff project—just one piece of a massive effort to protect Southeast Queens families from flooding—we are now that much more prepared to fight back against the challenges climate change will throw at our borough.”

“The increased frequency and intensity of climate related weather events has proven that NYC must continue to work towards hardening our infrastructure; given recent events and the surge of flooding parts of our community have seen due to Hurricane Ida, the project upgrades to help manage stormwater and reduce flooding are not only essential, but timely.” said Senator Leroy Comrie. “I want to commend the Mayor’s office, my colleagues in city government, DEP and NYC Parks for bringing to fruition this stormwater management project at Roy Wilkins Park here in Southeast Queens. Expanding drainage capacity, utilizing green infrastructure technology and diversion of overflow are all tools that we need to protect our residents from the perils of an imminent climate event.”

“What wonderful news for Southeast Queens at a time when some areas in the community are dealing with much hardship after Hurricane Ida,” said Assembly Member Alicia Hyndman. “Thank you to DEP for the continued work to relieve pressure off of our main sewer system and create alternative ways for stormwater to be collected around and near our beloved Roy Wilkins Park. These efforts aren’t going unnoticed and we hope to continue to put forth resources to keep Assembly District 29 as dry as possible.”

“We are excited that these green infrastructure projects are finally being completed around the district. This is one more tool to mitigate flooding in an efficient and eco-friendly way. Along with the rain gardens and other natural drainage systems, we are committed to utilizing all the avenues at our disposal to best prepare for the next extreme weather event,” said Council Member I. Daneek Miller.

During construction, a curb inlet was built along Merrick Boulevard between Baisley Boulevard and Victoria Road and subsurface pipes were installed below the sidewalk to drain stormwater from the roadway and into the Park. The bioretention basin within the Park was excavated to a depth of about five feet. Subsurface storage chambers were installed and then the excavation was backfilled with layers of stone and engineered soil. These layers contain void spaces that store the stormwater and promote infiltration. The addition of hardy native plants further encourages infiltration through root growth and increases the capacity of the bioretention basin through evapotranspiration.

The pond within the Park also accepts stormwater and overflows into the sewer system if it becomes full. As part of the project, DEP restored the historical capacity of the pond by dredging accumulated sediment from the bottom. This will reduce the amount of any overflow from the pond into the sewer system and will thereby help to promote roadway drainage and reduce flooding. In addition, trash and non-native species such as Phragmites were removed and native species were planted along the perimeter of the pond to promote natural filtering of the water and biodiversity.

The project at Roy Wilkins Park is a part of the ongoing $1.9 billion investment by the de Blasio Administration to build a comprehensive drainage system and alleviate flooding in neighborhoods throughout Southeast Queens.

DEP manages New York City’s water supply, providing approximately 1 billion gallons of high-quality drinking water each day to nearly 10 million residents, including 8.8 million in New York City. The water is delivered from a watershed that extends more than 125 miles from the city, comprising 19 reservoirs and three controlled lakes. Approximately 7,000 miles of water mains, tunnels and aqueducts bring water to homes and businesses throughout the five boroughs, and 7,500 miles of sewer lines and 96 pump stations take wastewater to 14 in-city treatment plants. DEP has a robust capital program, with a planned $20.1 billion in investments over the next 10 years that will create up to 3,000 construction-related jobs per year. For more information, visit nyc.gov/dep, like us on Facebook, or follow us on Twitter.