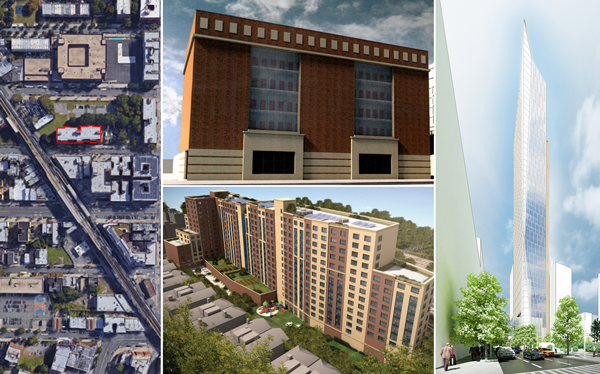 From The Real Deal

JEMB Realty may have dramatically scaled down its plans for a tower at 420 Albee Square, but the Downtown Brooklyn development still topped the list of biggest real estate projects filed with the city last month.

The company is planning a 37-story office tower that would include a 300-seat school. New schools planned for Cypress Hills and Long Island City made the list as well, as did multiple residential projects coming to the Bronx. The only Manhattan project to make the list was a hotel in Chelsea from Sam Chang, while the sole Staten Island project was a self-storage facility from Equator Capital Management.

The full list of September’s top 10 biggest real estate projects is below:

JEMB Realty is planning to bring a 37-story building to the heart of Downtown Brooklyn. The tower would span about 385,000 square feet and contain office and commercial space, including a 300-seat school on the first six floors. FXFOWLE Architects is designing the project, and JEMB received a $56.5 million loan for it from the French bank Natixis in July.

JEMB, led by Morris Bailey and Joseph Jerome, originally planned for the tower to be significantly higher but scaled down the proposed height from 65 stories to 35 stories in March 2015.

The Ader Group, a real estate investment firm based in Monsey, plans to turn this former Bronx parking facility into an affordable housing complex with hundreds of units.

Prolific hotel developer Sam Chang is planning yet another hotel on West 24th Street in Chelsea. This one will rise 45 stories and span about 143,000 square feet. Architect Gene Kaufman will design the building, which will contain 508 rooms.

Chang has several hotels located throughout the city, including a Holiday Inn at Times Square and a Hyatt Place that is under construction in the Garment District.

Private equity firm Equator Capital Management signed a $70 million 99-year lease for this site in August, and it plans to construct a self-storage building on the land that spans about 138,000 square feet and stands four stories tall. Architect Frank Relf will design the project.

Property Resources Corporation filed plans last month for an eight-story residential building spanning about 131,000 square feet in Longwood. Architect Peter Clements will design the building, which will be mixed-income and have 161 apartments. Property Resources also has Bronx projects at 1000 Fox Street and 960 Simpson Street.

New York’s School Construction Authority has filed plans to build a roughly 117,000-square-foot school in Cypress Hills. The school will be five stories tall, and architecture firm Perkins Eastman will design it.

The city’s Department of Housing Preservation and Development has filed plans for a new mixed-use building on Rockaway Beach Boulevard that will be eight stories tall and contain 119 units. The project will span about 95,000 square feet and was filed on Sept. 7, the same day the City Council unanimously passed the Far Rockaway rezoning.

The School Construction Authority makes its second appearance on this list with the agency’s plans for a roughly 94,000-square-foot school at 40-11 28th Street in Long Island City. The four-story school will be known as the Academy of American Studies.

Rounding out the list for September is a high-rise building planned for the Brooklyn waterfront from Halcyon Management.  The company filed plans for a 14-story mixed-use building in Greenpoint that would span about 91,000 square feet. The building’s 92 residential units would take up about 87,000 square feet, and a community facility would occupy the rest of the space. Halcyon is also planning a 19-story building with 234 residential units next door at 27 West Street.