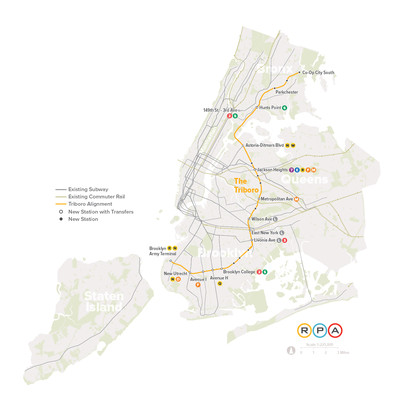 Future of Transportation In NYC Boroughs

From the moment that the first streetcars started rumbling along New York City’s streets in the 19th century, people have sought ways to make it easier, more efficient, and safer to get around the five boroughs. This can lead to brilliant innovations that change the city as we know it—the subway may be a broken mess now, but it’s one of the biggest catalysts in the development of modern-day New York—as well as hare-brained schemes that never go beyond the conceptual phases.

That desire to improve New York transportation continues to this day, and in addition to larger capital projects (like the MTA’s East Side Access, or Governor Andrew Cuomo’s push to modernize airports and other transit hubs), there are a plethora of ideas out there that would better connect the boroughs, or make the process of getting around just a smidge easier. (Though the viability of some of those is questionable, at best.)

So what could the future of NYC transportation look like? Here, we’ve chosen to highlight 10 different projects that could radically alter the way that New Yorkers get around, from the practical (ferry service from the Bronx) to the pie-in-the-sky (aerial gondolas).

In just three months since its launch, New York’s citywide ferry system has proven to be a hit—both with commuters and tourists—and it’s not slowing down anytime soon. The ferry surpassed 1 million riders in July this year, and debuted its latest route, connecting Astoria to Lower Manhattan, last month.

And soon, the often overlooked Bronx—which still hasn’t gotten Citi Bike docks, despite that system rolling out in 2013—will get its own ferry stop: the soon-to-launch Soundview route will connect the Financial District to the South Bronx waterfront, with stops at Clason Point, East 90th Street in Manhattan, and Pier 11/Wall Street. The total journey is estimated to take 43 minutes in either direction.

Following years of complaints from local residents, the Sheridan Expressway will finally get an overhaul. Governor Andrew Cuomo has pledged $700 million towards the revamp, which will ease traffic congestion in the South Bronx and provide access to the waterfront.

Plans call for flyover ramps that will connect Sheridan Boulevard and the Bruckner Expressway to Edgewater Road, making it a lot easier for trucks to access the Hunts Point Produce Market. At present, trucks tend to use local roads, causing traffic and noise headaches for nearby residents.

Other improvements that are part of this overhaul include wider medians, improved lighting, and walkways that will provide pedestrians access to Starlight Park and the Bronx River. Construction is scheduled to begin next year, and wrap up by the spring of 2019.

The proposal for a 17-mile streetcar connecting the waterfront neighborhoods of Brooklyn and Queens materialized in early 2016 with sudden force. By the time it was picked up by the press, the Brooklyn-Queens Connector already had the backing of a nonprofit group that counted real estate developers—whose projects would benefit from its services—among its members. It also has the backing of Mayor Bill de Blasio, who’s been stumping hard for the project. (It also has its detractors, including those who said it would lead to rising rents in neighborhoods like Sunset Park.)

But the pie-in-the-sky idea hasn’t taken off just yet. A long-promised feasibility study conducted by the city has yet to materialize, and in the spring, a leaked memo suggested that the project would not end up being financially sustainable.

Despite the setbacks, De Blasio insists things are on track, noting on Brian Lehrer’s WNYC show in early August that “it’s a plan that we said from the beginning, construction would start on it in 2019 or 2020. So, it’s just the normal course of things.” Which way the course will veer—to completion or failure—remains to be seen.

At a time when subway ridership is nearing an all time high and buses continue to be strongly mediocre, transportation think tank Regional Plan Association has surfaced a proposal for an outer-borough rail connecting The Bronx, Queens, and Brooklyn that would significantly reduce travel times for those looking to bypass Manhattan.

The Triboro rail line would run 24 miles between Co-op City and Bay Ridge, with the opportunity to connect to Staten Island in the future. The above-ground line would intersect and connect with 17 existing subway lines and four commuter rail lines, and also include 24 of its own new stops. RPA estimates that about 100,000 people would take the Triboro daily, which trumps the daily ridership of the Staten Island Ferry by about 30,000 people.

The feasibility of the project is now being evaluated—the city has yet to address the proposal—but the RPA is pushing forward regardless. (It’s devised a proposal that would use an existing rail right-of-way, significantly reducing both the projected cost and development time.) As with all things, the concern is: but how much will this cost? RPA nails the initial estimate at $1 billion to $2 billion (which is, er, pretty lenient), including the cost of installing signals, new track, rail cars and stations, and possibly power substations.

It may have taken more than two decades to get here, but Moynihan Station is finally becoming a reality. The plan for a revamped Penn Station at the James A. Farley Post Office building has been in the works since the early ’90s, when it was championed by the late Senator Daniel Patrick Moynihan, but—as tends to happen—it was waylaid by bureaucratic shenanigans and financial woes, among other things.

But in recent years, the project has actually gained steam, with Governor Andrew Cuomo pushing through a $1.6 billion renovation plan, due to be completed by—yes, really—2020.

It calls for moving much of the current, cramped Penn’s operations into the Farley building, which will transform into an enormous 255,000-square-foot train hall. It’ll be topped with a 92-foot skylight that’s meant to evoke the look and feel of the old Penn Station—as in, the one designed by McKim, Mead & White back at the turn of the 20th century. Skidmore, O

wings & Merrill, which has been on the project for years, will design the new station.

With the L train shutdown looming, city officials have been scrambling to come up with ways to mitigate the sure-to-be-crappy effect it’ll have on New Yorkers’ commutes. (To recap: there won’t be any L service between Manhattan and Brooklyn, or along the 14th Street corridor in Manhattan.)

While many far-out schemes have been proposed to provide service during the 18-month period of repairs, one that has, improbably, gotten the support of some politicians is the so-called East River Skyway. As proposed, the aerial gondola would travel between the Lower East Side and Williamsburg in five minutes, with around 5,000 people able to be moved per hour. The cost: $134 million.

So why are officials on board? According to state assembly member Joseph Lentol, “The East River Skyway is an innovative and hip mode of transportation that embodies the forward thinking population of North Brooklyn.” Riiiiight. It remains to be seen if this will actually come to pass; Lentol, along with State Senator Carolyn Maloney and City Councilman Steven Levin have all expressed their support, but De Blasio has yet to chime in. Put this in the “wait and see” column for now.

Construction on LaGuardia Airport’s $4B overhaul got underway in the summer of 2016, and the newest sections of the brand new airport will debut in 2019. It hasn’t been all smooth sailing since construction started, however; the airport has been plagued by traffic congestion, but that should finally ease up when a new set of roadways and a new parking garage are complete in 2018.

Over the course of construction, rumors have swirled that the construction price tag could rise to $8 billion, but the Port Authority has vehemently denied this so far. In February this year, the Port Authority’s board approved a massive $32.2 billion capital plan, so at least a large chunk of funding for the airport has already been secured.

A host of elected officials broke ground on the final phase of construction in early August this year, and by 2021, all sections of the airport will be unified into a brand new LaGuardia Airport.

One of the more contentious transit proposals that’s come from Cuomo’s office in the past few years is the AirTrain connecting LaGuardia Airport to Midtown. As proposed, the AirTrain would connect to the 7 train at the end of the line in Flushing, with two stops at the airport.

But critics of the plan have noted that not only will it be costly, it may not save that much time for commuters compared to the already-existing bus lines—including Select Bus Service along the M60 and the Q70—that serve LaGuardia. And it won’t be cheap; it’ll reportedly cost the Port Authority (which operates NYC’s airports) as much as $1 billion to build and maintain over the next 10 years.

In any case, the whole thing is currently up in the air, but the state was seeking partners on the project earlier this year, and had solicited firms to conduct “preliminary engineering and other planning work.”

Manhattan’s not the only borough that could have an aerial people-mover in its future; Staten Island’s Economic Development Corporation (SIEDC) has been mulling an idea to create an aerial tram that would connect the borough’s Elm Park neighborhood to Bayonne, New Jersey.

The idea is to have the gondola run parallel to the Bayonne Bridge and connect to the Hudson-Bergen Light Rail’s Eighth Street station. From there, commuters would be able to board a PATH train to Manhattan, with a total trip time of 33 minutes.

SIEDC is doing its best to get the community on board with the proposal, first launching a design competition in early 2016 and subsequently taking taking a life-size model of of the winning design on a week-long tour through the borough in April of this year. The group is also in the process of fundraising for a feasibility study and estimates that the aerial gondola would cost around $60 million to construct.

For more than a decade, local officials have entertained the idea of a light rail on Staten Island’s West Shore but it wasn’t until 2016 that the proposal inched toward becoming a reality.

The plan calls for the rail line to have a 13 mile route along the West Shore with stops between Richmond Valley and Elm Park. The line would transport commuters to the Bayonne Bridge where they would then pick up the New Jersey Transit’s Hudson-Bergen Light Rail. It would cost around $1 billion to construct.

Initial studies were conducted in 2004 and 2009 that looked at potential ridership and if the corridor would support the light rail, reports SI Live. The SIEDC, who is the project’s biggest advocate, finally made some progress in 2016 when the MTA committed to $4 million from its capital plan to fund a study that will determine the feasibility of the proposal. That’s expected to take two years to complete, so don’t expect this particular project to get moving anytime soon.